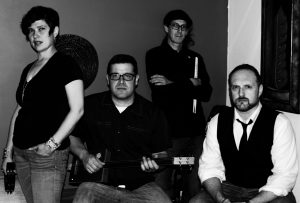 Missy Flapjack and The Butterworth Blues Band have been serving up delicious blues and rock for nearly a decade in Atlanta and across the Southeast.  Featuring Brian Rosen on guitar, David Knaub on drums, Jon Roberts on bass, and Alexis M. LaSalle as Missy “Mississippi” Flapjack on lead vocals and keys, this band has performed all over the metro area, most notably on the line-up for the 2010 Guinness Book world-record breaking longest concert ever at the Red Rabbit Pub in John’s Creek.  The BBB has also performed for several charity events, including The Etowah Valley Human Society’s annual event, the Hogs For Dogs poker run, which raises money and awareness for homeless shelter animals.  This band writes and performs a variety of rock and traditional blues-style songs and are currently producing and arranging several new songs for their upcoming 2017-18 record release.  Look for their upcoming debut album, Sunny Side Up, featuring “When You Least Expect It”, “Dirt.”, “Miles of Craggy Road”, and “Sing Tonight”.

Want to sponsor our event or make a donation?